In Sweden, patients with skin burns that are classified as high-risk are referred to one of the two highly specialized burn units, one of which is at the University Hospital in Linköping. These include patients with a burn area of more than 10%, patients with deep burns, or burn injuries on hands or feet.

To prevent infections and the formation of scar tissue after a deep burn, it is important to very early excise the injured tissue and to replace it with a skin graft. This shortens hospital stay and reduces costs. A major problem is to know early whether a burn is deep, and will need grafting, or whether it is superficial and will heal by itself. Accurate assessment of the depth of a burn at an early stage is therefore very important in clinical decision-making.

It has been known for a long time that the presence of an intact microvasculature is a good predictor of wound healing in burns, and Laser Doppler perfusion imaging in burn wounds has proven to be very accurate in predicting healing time. A limitation of laser Doppler perfusion imaging is that it takes a relatively long time (seconds to minutes) to measure the perfusion in a burn. Apart from the practical disadvantage of the measurement taking a long time, laser Doppler imaging also tends to be affected by motion artefacts leading to inaccurate measurements, particularly in children.

During the last five years, we have therefore been using the PeriCam PSI system both in our research and clinically for the assessment of skin burns, mainly because this technique allows for very fast perfusion imaging in a relatively large area of skin. Basically, the system makes it possible to collect images of skin burns within a fraction of a second.

Therefore, we decided to determine the accuracy (sensitivity and specificity) of LSCI in the assessment of the healing time of scalds. We basically found that the perfusion in scalds between 3–4 days after injury is highly predictive of healing outcome. We also found that the predictive value can be further improved by doing an early perfusion measurement within 24 h after injury and looking at the change in perfusion over time.

Currently, the PeriCam PSI system is permanently stationed at the burn unit and is used regularly to aid in the assessment of burn severity. 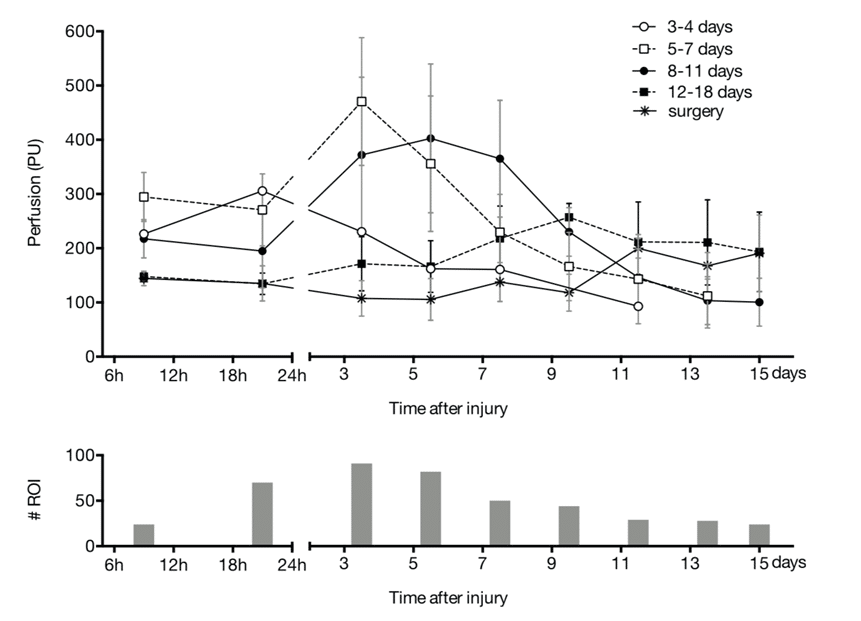 The mean (SD) perfusion in scald burns of different severity in children, as measured using the Pericam PSI system during the first 24 hours and subsequent 15 days after the injury (N=149).

Disclaimer: It is possible that the products on the Perimed website may not be cleared for sale in all markets.